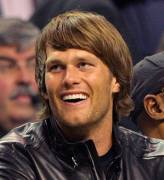 Tom Brady's four game suspension on Monday prompted support from fans of the New England Patriots as well as jokes from others.

The NFL suspended Brady after an investigation found the quarterback was "at least generally aware" of the deflated footballs that helped his team nab the AFC Championship in January.

The Patriots went on to win against the Seattle Seahawks and take Super Bowl XLIX.

"Obviously the football, I think it is about integrity and you have to follow the rules. If someone's breaking the rules I understand you're gonna get punished for it. Obviously the NFL is serious about not messing with the integrity of the game, no matter big or little the issue is."

"They had no definitive proof against Tom Brady or Patriots. If Hillary doesn't have to produce Emails, why should Tom? Very unfair!," he ranted.

"People are so jealous of Tom Brady and the Patriots. No court could convict based on the evidence.They can't beat him on the field, so this! Why do we always try to destroy our true champions and winners in this country, while at the same time leaving the losers alone? STUPID!"

Meanwhile, MC Hammer was shocked: "Whoa... That's complex in all its implications. You have to ask yourself why would the NFL want to take on this arduous high profile litigation against Tom Brady... and the timing, why now?"