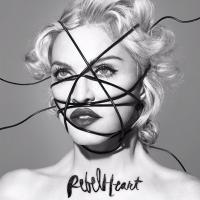 Donald Trump has lashed out at Madonna over her speech at the Women's March in Washington DC.

Trump blasted the singer for the speech during which she dropped three F-bombs and said that she had "thought an awful lot about blowing up the White House."

"I thought her, and a couple of others. But I thought she was in particular — I thought what she said was disgraceful to our country."

Following her speech, Madonna said she did not encourage violence and felt her speech was taken "wildly out of context."

"Yes, I'm angry. Yes, I am outraged," she said at the March. "Yes, I have thought an awful lot about blowing up the White House, but I know this won’t change anything. We cannot fall into despair. As the poet WH Auden wrote on the eve of World War II: 'We must love one another or die. I choose love.'"

"I don't mind some humor, but it's terrible," he said. "For them to attack, for NBC to attack my 10-year-old son, it's a disgrace. He's a great boy and it's not an easy thing for him. Believe me."

NBC suspended Rich indefinitely almost directly after she made the joke on social media.