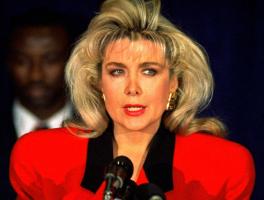 Donald Trump floated the idea of inviting Gennifer Flowers to Monday's presidential debate in response to a growing feud with Mark Cuban.

After Cuban tweeted about his front-row seat at the upcoming presidential debate to support Hillary Clinton on Twitter, Trump fired back.

"If dopey Mark Cuban of failed Benefactor fame wants to sit in the front row, perhaps I will put Gennifer Flowers right alongside of him!," he wrote.

Flowers made headlines in the 1990s when she said she had a 12-year sexual relationship with Bill Clinton during his time as Arkansas governor.

She has accused Hillary Clinton of being "an enabler that has encouraged him to go out and do whatever he does with women."

"I think it's a joke that she would run on women's issues."