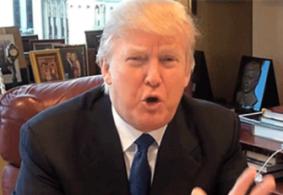 After Donald Trump's campaign announced its shake up Wednesday morning with a new chief executive and campaign manager, CNN hoped to get some answers from Michael Cohen.

Appearing on CNN's 'Situation Room' in the afternoon, the executive vice president of the Trump organization and special council to Donald Trump was clearly in damage control but one particular line in his exchange is going viral.

Asked whether the moves were because their slipping poll numbers, Cohen repeatedly said "Says who?"

"Let me ask you about this, you say it is not a shake-up but you're down," CNN's Brianna Keilar told Cohen.

"Says who?," Cohen said once more.

"Polls. I just told you, I answered your question," said a perplexed Keilar.

"All of them," Keilar said almost rolling her eyes.

When asked about being down in the race, Trump adviser replies, "Says who?"https://t.co/HO9wqbdDWR https://t.co/C2UzSDdUo4