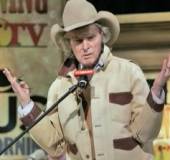 Radio host Don Imus announced on his radio show Monday morning that he has prostate cancer, but expressed confidence in a full recovery.

Imus, 68, said he wrestled with the idea of making it public, but figured he should because he might have to miss some work due to treatment.

"The prognosis couldn't be better," he said. Stage II prostate cancer means that the disease has not spread outside the prostate, according to the National Cancer Institute.

"The day you find out is fine," he said. "But the next morning when you get up, your knees are shaking. I didn't think I could make it to work."

Imus said he was surprised anything about the diagnosis, since he's tried to follow a healthy diet for the past ten years. He made note that doctors seemed reluctant to talk about one of his big worries: what prostate cancer treatment will mean for his sex life.

More than 186,000 American men are diagnosed with the disease each year and 29,000 die of it, according to the American Cancer Society. If the tumor hasn't spread to other organs, most men live at least five years since the cancer is still in a relatively early stage.