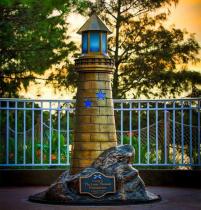 Disney World has erected a statue in remembrance of 2-year-old Lane Graves, who was killed at Disney's Grand Floridian Resort & Spa when an alligator attacked him as he was playing on the beach.

The memorial statue is of a lighthouse, the symbol of the foundation dedicated to him, reads: "Presented to the Lane Thomas Foundation. A beacon of hope. A light of love."

"We find comfort that so many people continue to remember our sweet boy, Lane, and we believe the lighthouse stands as a beacon of hope and support for families in the depths of despair."

"We will continue to honor Lane and preserve his spirit through the Lane Thomas Foundation."

Disney announced plans to erect the statue in June, one year after Lane's death.

It hopes the statue helps spread awareness of the foundation, which was established to provide assistance "support to families whose children need organ transplants."

Following the incident, it also set up warning signs to alert people to the dangers of alligators in the area.