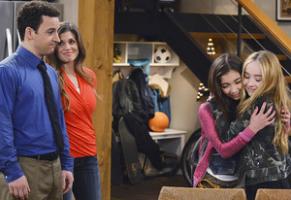 The series, which will follow Cory and Topanga happily married and raising their 13-year-old daughter in New York, filmed a pilot this spring and Disney has now given the project the green light.

The comedy will began production this summer for a premiere sometime early next year.

"I am grateful to everyone at Disney Channel for the opportunity to reach my favorite audience, which has always been kids," says creator Michael Jacobs, who was also behind the beloved original '90s series.

"Girl Meets World is a new show for a new generation that will be rooted in the same kind of honest, comedic storytelling about coming of age and the importance of family and friendship that made Boy Meets World so popular."

In its release, Disney promises 'Girl Meets World' will "tell the wonderfully funny, heartfelt stories that Boy Meets World is renowned for, only this time from a tween girl's perspective."

As for what Cory and Topanga are up to, besides raising Riley, Ben Savage's character is a history teacher at Riley's middle school, while Danielle Fishel's Topanga owns a trendy afterschool hangout.