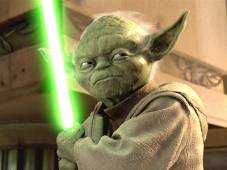 Disney, now the owner of Lucasfilm, has announced it plans to release standlone 'Star Wars' spin-off films based on individual characters in the franchise.

Disney CEO Robert Iger confirmed that the studio is working on a number of such films in addition to the planned trilogy.

"We are working on a few stand-alone films, derived from great Star Wars characters that are not part of the overall saga," he said on CNBC.

'The Empire Strikes Back' screenwriter Lawrence Kasdan and 'X-Men: The Last Stand' scribe Simon Kinberg are working on the new projects.

The first one of which is rumored to be centered around Yoda. Although Iger would not confirm or divulge further details.

"The implications for Star Wars fans will be great," Iger said. "We have these great opportunities because there are these good ideas out there and good creators interested in fleshing out these ideas, and we're going for it."

Iger said the standalone films will be released in the six-year period that the company announced for its new trilogy.

"We still plan to make Star Wars 7, 8, and 9 roughly over a six-year period of time, starting in 2015. But there are going to be a few other films released in that period, too," he said.