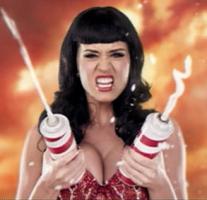 Diplo is responding to his Katy Perry (photos

)'s claim that he was worse in bed than John Mayer and Orlando Bloom.

Perry made the comment during a livestream where James Corden asked the 32-year-old singer to rank her exes Diplo, Mayer and Bloom based on their bedroom skills.

"From best to worst in bed. This is working on the notion that they're all good," 'The Late Late Show' host said.

"No, no, no! I will not do that!," Perry said before relenting. "They're all amazing lovers and I would have sex with all of them after I get out of this place."

She then ranked Mayer as the best followed by Bloom and lastly Diplo.

But that didn't sit well with the 'Swish Swish' singer, who briefly dated Diplo in 2014.

"I don't even remember having sex," he quipped on social media.

He later shared a photo of himself dangling from a lighting rig at a festival with the caption: "I won the bronze metal in sex Olympics."