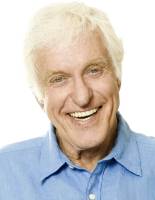 Dick Van Dyke has treated diners at a Denny's in California to a rendition of 'Chitty Chitty Bang Bang'.

The 90-year-old Van Dyke and the other three members of his quartet, The Vantastix, were at the restaurant for breakfast after wrapping up an appearance on a local television show.

The quartet sat sang the theme song to the 1968 British musical, which starred Van Dyke.