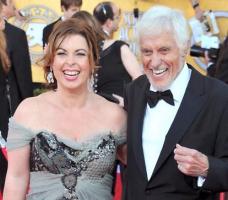 At age 86, Dick Van Dyke is a newlywed for the second time.

Van Dyke has married makeup artist Arlene Silver, 40, in a small ceremony at a Malibu chapel.

The two became friends about five years ago after meeting at the Screen Actors Guild Awards.

"I was in the green room and she passed through and I was bowled over by her beauty," he says in his first interview since tying the knot.

"We're looking forward to a long and happy marriage. The ceremony was kind of spur of the moment, we just decided it was the best time to do it. I'm not a loner. I have to have a life partner. I found the perfect one."

Van Dyke's first marriage to Margie Willett ended in divorce after enduring from 1948 to 1984. More recently, Michelle Triola Marvin, his partner of 30 years, died in October 2009 at age 76.

"I've never seen him happier," says the actor's publicist. "She adds a lot to his life."