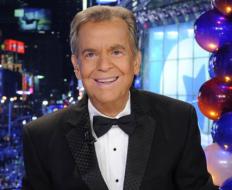 Dick Clark underwent prostate surgery the day before he died of a heart attack.

According to his death certificate, Clark underwent surgery on his prostate on April 17 due to acute urinary retention.

The following morning, the longtime TV host died from a heart attack at St. John's Hospital in Santa Monica at the age of 82.

"He had very minor prostate surgery. All of a sudden, he got a feeling in his arm about 9:30 in the morning and he was gone by 11:15," says friend and Congressman David Dreier. "It turned out to be a massive heart attack."

The certificate says Clark suffered from coronary artery disease and lists the cause of death as myocardial infarction, ie. a heart attack.

Dick Clark's remains have been cremated. There's been no official announcement regarding a memorial service. However, the New York Post reports that he will be honored next New Year's Eve in Times Square, where he televised the ball-dropping ceremony for decades.