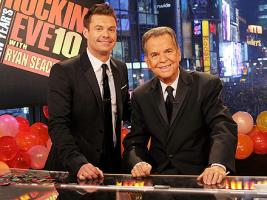 'American Idol' began its broadcast Wednesday night with a short tribute from Ryan Seacrest to Dick Clark, who was not only the host's mentor and friend but paved the way for live musical television shows with 'American Bandstand'.

"We can't begin tonight's show without acknowledging the passing of a television pioneer and my dear friend, Dick Clark," Seacrest said of Clark, who died of a heart attack at the age of 82.

"Without Dick, a show like this would not exist. He will be missed greatly. Our thoughts and our prayers go out to his family. I know that he is in a better place saying, hey, let's get on with the show, okay? You got it boss."

Seacrest, who had hosted Dick Clark's New Years Rockin' Eve alongside Clark since 2006, said early in his career that he wanted to model his path after Clark, who he described as the perfect host.

The 'Idol' host, also received some valuable advice from Clark early in his career that helped him negotiate a piece of the ownership for the televised On Air and got him thinking about producing other shows.

Meanwhile, 'The Voice' host Carson Daly, who began his career with MTV's 'Total Request Live', said: "We lost an icon today. I will always cherish the personal time we had together. I am forever indebted to Dick Clark and his legacy. My heart goes out to his family."

"Michelle and I are saddened to hear about the passing of Dick Clark. With 'American Bandstand', he introduced decades' worth of viewers to the music of our times. He reshaped the television landscape forever as a creative and innovative producer," said Obama. "And, of course, for 40 years, we welcomed him into our homes to ring in the New Year."

"But more important than his groundbreaking achievements was the way he made us feel - as young and vibrant and optimistic as he was. As we say a final 'so long' to Dick Clark, America's oldest teenager, our thoughts and prayers are with his family and friends - which number far more than he knew."

See what a number of other celebrities had to say below:

"I was very sad to hear this news. We all felt Dick was always this handsome teenager, as we all got older, Dick remained a teenager. I will always appreciate what he did for me and for popular music. He presented Motown and The Supremes on tour with the Caravan of Stars and on American Bandstand where I got my start. Dick Clark was a pioneer, he was a music star maker, he was a legend and was my friend. He said that 'music is the soundtrack of your life.' Since I was 16, he was always a part of mine. My love and prayers go out to his family." -- Diana Ross.

"Dick Clark will be truly missed. We will carry on his legacy every New Year's Eve." -- Fergie of the Black Eyed Peas.

"You'll continue to be an inspiration to us all Dick Clark. Thanks for the amazing rockin years you were with us. You'll truly be missed." - The Jonas Brothers.

"Very saddened about the loss of Dick Clark. We hosted the very first Rockin' New Year's Eve; truly honored to have worked with him." - Three Dog Night.

"A sad day as we have lost Dick Clark, an American Icon. You will be missed." -- 'Glee's Matthew Morrison.

"Rest in peace to the Dick Clark!! You were pioneer and a good man!! Thank you sir." -- Snoop Dogg.

"I'm one of the lucky people who can say that I knew Dick Clark personally. Dick produced almost every awards show I was on during the 80s, and he constantly encouraged me toward success. He will be missed by everyone - especially by those who knew him well." -- Kenny Rogers.

"This is a sad day. He was a dear friend, supporting me and my music for all of my years in the business. A great businessman and a true gentleman. An inspiration. My heart is so heavy now." - Barry Manilow.

"Dick Clark changed the face of musical television. He was wonderful to many artists including our family. We will miss him. God bless." -- Janet Jackson.