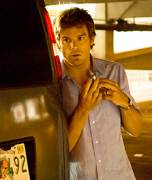 If you haven't seen the season four finale of 'Dexter', be warned there are spoilers ahead.

Not only was the season finale seen by 2.6 million viewers to set a new record as the most-watched original series episode ever on Showtime, it's also being hailed as one of the best season enders of the series.

So why did producers decide to kill off Rita and how did Julie Benz take the news?

"I would say we made the decision pretty late in the season. We didn't quite know what we were going to do in the finale," executive producer Clyde Phillips tells 'Entertainment Weekly'.

"The story evolved and it kind of became inevitable. We knew that we had to do more than kill Trinity. It's a little bit of a corner that we paint ourselves into."

"Last year we tried to avoid that and actually I think we didn't do as well as we could have. We killed off Jimmy Smits' character in the 11th of 12 episodes and then we had to figure out what we were going to do in the 12th episode."

"This season, we knew that we were going to take Trinity out in the 12th episode and we think that the audience knew that, too. We had to raise the bar to as high as possible and then figure out what to do next year."

"She wasn't happy," he says of Julie Benz's reaction to the ending. "She loved being with us. We loved having her with us. She took it professionally. She was greatly disappointed. She's a professional. She works in television. She knew that this was a possibility."

And whether we'll see Benz again, perhaps as a ghost like Dexter's dad, Phillips says: "The answer is no. However, had you asked me two years ago if Lundy was coming back I would've said no. We didn't know he was coming back until this year. It just seemed expedient to the story — to Dexter's story and to Debra's story."

Looking towards next year, Phillips explains: "Dexter is a single father. But, beyond that, we don’t know. We don’t know if there’s going to be what we call 'a Big Bad', like Jimmy Smits and John Lithgow, or if it’s going to be more individual, stand-alone stories."

"There were rumblings that something major was going to happen," says Benz. "I even asked the producers and they said, 'We would never kill Rita.'"

"But it was my day off, and I was called in for a meeting with the producers. At that point, you pretty much know. It was a tough meeting. In a bizarre way, it felt like a scene from 'Defending Your Life.'"

Although she definitely agrees the ending was appropriate to shake up the structure of the show for next season, especially moments after Dexter was seemingly finally accepting life with his family: "It's a very poetic mirror to how Dexter was found when he was 3," says Benz.