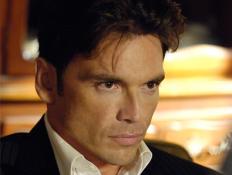 Gedrick, who portrayed a degenerate gambler on the cancelled HBO drama, will play the manager of a Miami-area strip club that becomes the center of a murder investigation.

The actor joins 'Rome's Ray Stevenson, who will reportedly play the leader of a Russian crime syndicate.

Filming on the season begins later this month. 'Dexter' will premiere on September 30.

Meanwhile, 'Breaking Bad's final season -- which will be split into two -- will return to AMC on July 15.

That will begin the run for the first eight episodes of the critically acclaimed show's fifth and final season -- which star Aaron Paul has promised will make you "shit yourself."

"Just read the first episode of Breaking Bad season five and words can not express," Paul, who plays Jesse Pinkman, said in March. "Shit is about to get crazy."

"Make sure u wear your diapers because I'm pretty sure u will shit yourself. The teaser alone in episode one will have you screaming more then when someone got blown up last season."

The only bad news for 'Breaking Bad' fans? The series' final half is currently scheduled to air a year later in summer 2013.