Dennis Rodman Apologizes For CNN Interview: 'I Had Been Drinking' 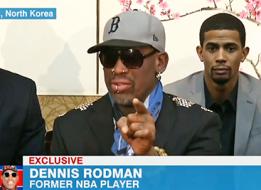 Dennis Rodman is apologizing for lashing out in an interview on CNN and says he "had been drinking" before the 'New Day' appearance because he was "overwhelmed."

In the interview, Rodman snapped after host Chris Cuomo repeatedly asked the former NBA star if he knew anything about Kenneth Bae, the US citizen who has been held in North Korea without any announced charges for more than a year.

"I'm saying to you, look at these guys here, look at them... they dared to do one thing, they came here," he said talking about American basketball players who had joined him in North Korea.

"You're the guy behind the mic right now," he said of Cuomo. "We're the guys here doing one thing. We have to go back to America and take the abuse. Do you have to take the abuse that we're gonna take? Do you sir, are you going to take the abuse? One day, one day, this door is going to open because these ten guys here, all of us. I mean everybody here, if we could open the door just a little bit for people to come here and do one thing."

On Thursday, Rodman said he wanted to explain his behavior and was sorry to Bae's family.

"I want to apologize," Rodman said. "I take full responsibility for my actions. It had been a very stressful day. Some of my teammates were leaving because of pressure from their families and business associates."

"I'm very sorry. At this point I should know better than to make political statements. I'm truly sorry."