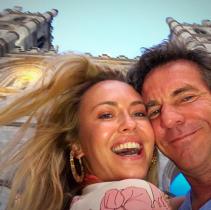 Following his divorce from his wife of 12 years, Dennis Quaid appears to have found love again.

All indications are the 62-year-old is dating 30-year-old French-Canadian model Santa Auzina.

The 30-year-old has been flooding her social media account with photos of them together, calling Quaid her "love" and "soulmate."

The actor is in Montreal, Canada filming the scripted series 'The Art of More'.

Quaid split from Kimberly, with whom he shares two kids, for the second time in June 2016. He was first spotted at Atwater Cocktail Club less than a month later with his arms around Auzina.