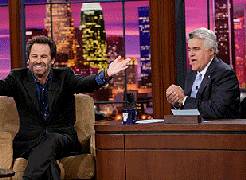 In an appearance on 'The Tonight Show', Dennis Miller ribbed Jay Leno for going easy in an interview with President Barack Obama last month.

"This is exciting. Is this the seat the president sits in?" Miller asked. "Wow that's cool... You guys have quite a bromance there."

"It's like a relationship. I've even come up with one of those celebrity nicknames for you two: JayLoBama," he quipped.

"I can see you guys doing comedy bits out there where you come out as Carnut the Magnificent, you have the turban on and make predictions, and he reads 'You are correct, sir' off a teleprompter that's four inches away."

"I sense some sarcasm in your tone," Leno asked. "Is there anything you like about President Barak Obama?"

"Listen, I like the fact that in the 24/7 news cycle that we know everything about each other: the man's never cheated on his wife," he said. "You know we would have found that out. I love the way he is with his kids. I like the figure he cuts for the United States of America but I just disagree with him."

Miller joked "one thing I didn't see coming is he is a freaking killing machine."

"Beforehand it was close Gitmo, no rendition, Patriot act. All of a sudden we are just killing people. If I was Barack I would play into it because people like to feel secure. I would bid on all of Gaddafi's old gear. I'd get the Captain Crunch hat and the doorman's outfit from the Plaza Hotel. They wanna take break the peace prize? Just level Oslo with a nuclear weapon."

"But I think if unemployment is at 9 percent, he's gonna get his ass handed to him like somebody who just got outpatient liposuction surgery."

As conversation moved to GOP presidential hopefuls, Miller said he had moved away from his endorsement of Herman Cain.

"They asked him a question about Libya and he appeared to have a mini stroke," Miller joked.

"He said, 'What part of a woman is that? I never touched her there,'" interjected Leno as the two burst out in laughter.