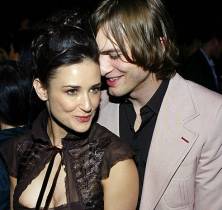 Amid the constant rumors that Ashton Kutcher cheated on her, Demi Moore has announced that she is ending her six-year marriage.

"It is with great sadness and a heavy heart that I have decided to end my six-year marriage to Ashton," the 49-year-old Moore says in a statement.

"As a woman, a mother and a wife there are certain values and vows that I hold sacred, and it is in this spirit that I have chosen to move forward with my life," she says, perhaps subtly hinting that reports of the affair were true.

"This is a trying time for me and my family, and so I would ask for the same compassion and privacy that you would give to anyone going through a similar situation."

Shortly after the bombshell from Moore, Kutcher responded with the following message on Twitter: "I will forever cherish the time I spent with Demi. Marriage is one of the most difficult things in the world and unfortunately sometimes they fail. Love and Light, AK."

The split comes a month and a half after reports that Kutcher had an affair with a woman he met at a San Diego's Hard Rock Hotel.

The 22-year-old woman told 'Us Weekly' that she had sex with Kutcher on the weekend of his six-year anniversary with Demi Moore following an all-night party in his suite.

The 'Two and Half Men' star didn't ever directly deny the rumors but instead talked claimed the media was "bastardizing the truth."

The couple also recently spent a few days at Bruce Willis' house, who is Moore's ex-husband, in the Turks and Caicos Islands to work on their marriage.

But, with the marriage under strain for some time, they eventually decided to go their separate ways.

The 49-year-old Moore and 33-year-old Kutcher married in September 2005 after dating for two years. This was the first marriage for Kutcher and the third for Moore.