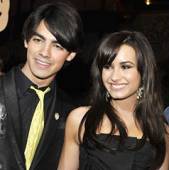 ) says she now wishes that she had kept quiet about her relationship with Joe Jonas.

After going public with their relationship in March, the two split up months later.

"I learned my lesson," the new 18-year-old tells 'People' magazine. "It's not very much fun when you break up in a public relationship. So, maybe next time keep a secret."

)'s heart, by breaking up over the phone in a record 27 seconds, Lovato defends her ex.

"I know that he has the best intentions," she says. "Definitely most guys don't have the same intentions that he does."

"You want to say to your fans, 'Guess what, I'm so in love with somebody.' You want to shout it from the rooftops. That's what you do when you fall in love," she says.

"At the same time, I learned my lesson. You know, I'll go public when I marry someone one day."

"No new romances for me", she says, before adding, "I'm perfectly happy with being single. I feel like also if I was going to have a new romance, I'd keep it private."