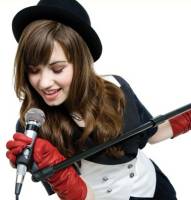 ) claims that she signed a "no-suicide contract" at the age of 7.

The 20-year-old singer and actress, who says she's been battling depression since a young age, says she first felt it even when she started on children's show 'Barney & Friends'.

"The principal called my parents and made me sign this suicide contract saying that I would not kill myself," she tells Rolling Stone. "They weren't expecting that so young."

Lovato says her parents have always been concerned with her mental well being and did the same following her stint in rehab a few years ago.

"My parents were like, 'You have two choices. We can either shut it down and not talk about it, or you can tell people what's up,'" she says. "There was no hesitation, really. I opened up that gate."

"Celebrities do have luxurious options, but my parents were like, 'No, you're going to learn something.'"

"It's not as scary as I thought it would be," she says.