Demi Lovato Says She Cut Herself Over Eating Disorder 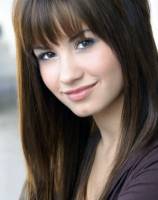 ) opens up about her eating disorder in interviews airing on 'Good Morning America' and '20/20' on Friday.

"I developed an eating disorder, and that's kind of what I've been dealing with ever since," says Lovato. "I was compulsively overeating when I was 8 years old. So, I guess, for the past 10 years I've had a really unhealthy relationship with food."

"It was a way of expressing my own shame, of myself, on my own body," she says of cutting her wrists to vent her despair.

"I was matching the inside to the outside. And there were some times where my emotions were just so built up, I didn't know what to do. The only way that I could get instant gratification was through an immediate release on myself."

"I literally didn't know why they were being so mean to me," she said. "And when I would ask them why, they would just say, 'Well, you're fat.'"

"I was performing concerts on an empty stomach. I was losing my voice from purging. I was self-medicating."

"I was not taking medication for depression, and I literally was so emotionally whacked out that I took it out on someone that meant a lot to me," she adds of what eventually made her seek some help.