Demi Lovato Not Impressed By Taylor Swift's $250,000 'Donation' To Kesha 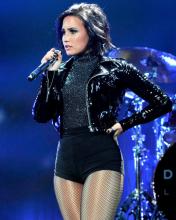 Swift donated the sum to help the singer "during this trying time" as she tries to extract herself from a contract with allegedly abusive music producer, Dr. Luke.

"Take something to Capitol Hill or actually speak out about something and then I'll be impressed," Lovato cryptically said on social media.

But she left no doubt when questioned by Swift's brigade of fans, who criticized her for making the story about herself.

"How the f--k am I making this about myself?," replied Lovato. "At least I'm talking about it. Not everyone has 250k to just give to people."

"Would love to but I didn't grow up with money and def haven't made as much as her. At least I speak up about s--t that's uncomfortable to talk about rather than trying to be politically correct 24/7."

"There's no 'rivalry'" she continued. "I just give more f--ks than other people and would rather start a dialogue ABOUT WOMEN COMING FORWARD ABOUT BEING RAPED than throw money at one person."

"Didn't shade Taylor. If you take it that way than fine," she responded. "I'm just tired of seeing women use 'women empowerment' and 'feminism' to further brands without actually being the ones that have the uncomfortable conversations."

"I get shade and I don't give a f--k because someone has to be the one to take it. At least I'm getting my hands dirty."