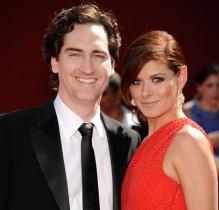 Debra Messing and her husband, Daniel Zelman, have separated after more than a decade of marriage.

The former 'Will and Grace' star's publicist reveals that the couple "privately separated earlier this year."

"The decision was mutual, and they remain supportive of one another and committed to raising their son as a family."

The 43-year-old met at New York University on the first day of graduate school.

"We were just classmates," Messing told 'Redbook' a few years ago. "And then we did Romeo and Juliet together. That was my attempt to get him alone. And it worked."

The two, who have a seven year old son together, dated for eight years before tying the knot on September 3, 2000.

However, in the same interview, she cautioned against expecting happy endings to last forever.

"But I'm not one to give out marriage advice," she added. "Circumstance has so much to do with whether or not your relationship survives and evolves. Daniel and I are very different—he's levelheaded, whereas I'm more the fiery, emotional one... It's sacrifice and compromise."