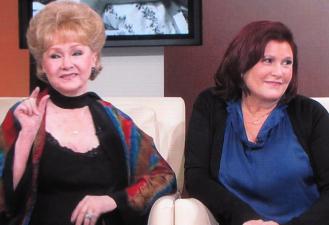 Debbie Reynolds has died at the age of 84, a day after the death of her daughter, Carrie Fisher.

Reynolds was hospitalized after suffering a stroke on Wednesday afternoon at her son Todd Fisher's home in Beverly Hills.

Todd said that the shock of Carrie's death "was too much" for her.

Reynolds appeared in many classic movies, including 'Singin' In the Rain', and was nominated for an Oscar for her role in 1964's musical comedy 'The Unsinkable Molly Brown'.

Decades later, she was still working and went on to earn an Emmy nomination for her recurring role as Grace Adler's mother in 'Will & Grace' in 2000.

"So heartsick. Debbie went to be with Carrie," star of the series, Debra Messing, said following the news. "It's such a devastating 1,2 punch. She was my 'mom' for years and I loved her dearly. A legend."

"Debbie went to be with Carrie. She always worried about her. Carrie left too soon and now they are together again. My heart is literally broken. She was pure energy and light when she came on stage. She was loving, and bawdy, and playful — a consummate pro — old school and yet had the work ethic and investment in her craft of a new fiery up and comer."

"An inspiration on every level. A legend, of course, the epitome of clean cut American optimism, dancing with Gene Kelly as an equal, a warrior woman who never stopped working. A devoted mother and grandmother, and aunt and great aunt, and friend."

"I lost my mom a few years ago. She loved that Debbie was my TV mom. I hope they find each other and hug and kiss and my mom says, 'I got you, Debbie. Carrie's waiting for you.' RIP Bobbie Adler."

Reynolds was also famous for her personal life. Her first husband and Carrie Fisher's father, pop star Eddie Fisher, left her for Elizabeth Taylor in 1958. She was also married to Harry Karl and Richard Hamlett.

She is survived by her son, Todd Fisher, and her granddaughter, Billie Lourd.