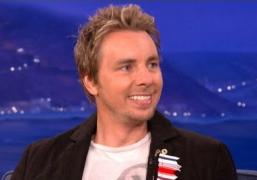 In an appearance with Conan O'Brien, Dax Shepard mocks 'The Expendables' and its stars Arnold Schwarzenegger and Sylvester Stallone.

Shepard does an impression of the actors and laughs that they may have muscles but they can't run.

"I wasn't so much attacking them as expressing concern for their tendons," he explains. "Because although you can get your muscles that big, there's nothing to help your tendons stay limber."

"They actually can't run was my point. The point I was making was in the movie you'll never see them chase a bad guy because they can't," he laughs.

"Stay here and fight. If you can run, we can't fight because I can't chase you. Only pussies do more than a walk," he impersonates Stallone.