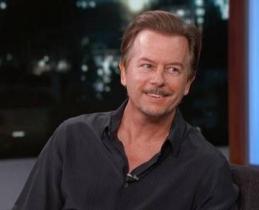 David Spade revealed on Thursday that he turned down an offer from NBC to replace David Letterman on 'Late Night' more than a decade ago.

In an interview on FS1's 'The Herd with Colin Cowherd', Spade said he was offered the job with a whopping $2 million a year when Letterman went from NBC to CBS.

"I was just mildly amusing. I am just trying to channel that into the sketches and be funny with an attitude. Adam Sandler was singing and writing songs and killing on every angle, and Chris Farley had big characters, and it was so hard to compete."

He said he told Michaels: "No, that sounds like a drag."

But in the back of the mind he was worried about taking the job and failing, "If that bombed, then I'm really in trouble too, that early on, to have a mark like that."

"I can't believe I said no," Spade said. "Then they went to Conan."