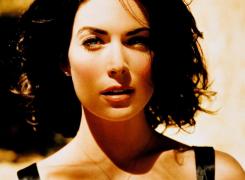 In the September issue of Details magazine, David Spade says Jack Nicholson stole his then-girlfriend Lara Flynn Boyle right in front of him.

"Nicholson asked Lara Flynn Boyle out in front of me, while we were all smoking a doob somewhere," says Spade.

Spade explains Boyle "got mad because I didn't stick up for her."

"I said, 'I've been in this town long enough to know when I'm outranked. You're either gonna go out with him or you're not.' She goes, 'No way. He's worse than Trump!'"

But those feelings didn't last long because she was later photographed in a car crash with Nicholson and "crawled out of the sunroof and yelled, 'I have a boyfriend! I can't be here!'"

Spade says he found out about the relationship after he saw the photos and the National Enquirer called him for comment.