David Letterman: Admitting To Sex Scandal Was Like Killing Family In Car Crash 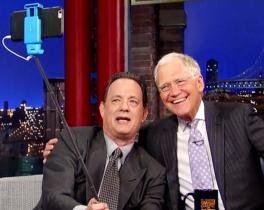 David Letterman went into a tailspin after he was forced to admit on air that he had sexual relations with female members of staff.

Letterman had to make the revelation after CBS News producer Robert Halderman tried to blackmail the 'Late Show' host for $2 million over his affairs.

"The creepy stuff was that I have had sex with women who work for me on this show," he told his stunned audience.

In appearances that followed, Letterman made light of it while saying he regretted the "reckless" affairs. However, the confession sent the married Letterman into a bout of depression.

In a new biography, 'Letterman: The Last Giant of Late Night' by New York Times reporter Jason Zinoman, the host told a writer on his show: "I'm in hell. I will always be in hell until the day after, when I will go to hell.'"

Zinoman writes Letterman said: "It was akin to having killed your family in a car crash. It was like that to me. I was afraid my family was gone."

Letterman used the show as a coping mechanism at a time when he didn't want to be in the public eye.

"I was looking for a refuge," Letterman said, according to Zinoman. "Whether they knew it or not, my staff was being used to support me. I didn't want to go outside. Outside I was scared. Scared as I've ever been in my life. The show was endlessly helpful."