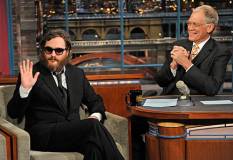 Days after director Casey Affleck admitted that his Joaquin Phoenix 'documentary' was a hoax, comes word even the actor's much talked about interview on the 'Late Show with David Letterman' was staged.

This despite Affleck's claim that nobody knew Joaquin Phoenix was faking his bizarre behavior for 'I'm Still Here', except for his agent.

It was great television," one of Letterman's writers, Bill Scheft, tells 'Nuvo'.

"But I will take credit for the line, 'I think I owe Farrah Fawcett an apology.' That line was mine. I gave that to him during the break."

"I've told people that (everyone was in on the joke), and not only don't people believe me, they tell me that I'm wrong and that he is a schizophrenic and he needs help and he's going to end up like his brother (River, who died of a drug overdose in 1993)."

"I said no. I saw the segment notes. It's an act. I saw Ben Affleck's brother taping the whole thing from offstage."

In fact, after watching the interview again, we noticed at the end of the segment, Phoenix quickly gets out of his seat, takes off his shades and thanks Letterman for a "good job."

Affleck called Phoenix's behavior "a terrific performance" and "the performance of his career" in his revelation Thursday.

Joaquin Phoenix will return to chat with Letterman next week. In light of this revelation, the comedian will almost certainly have to admit he was in on the joke but the way he does it could make all the difference.