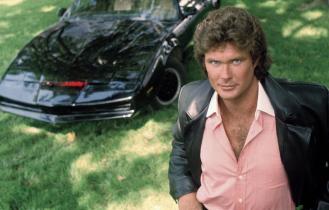 David Hasselhoff says he wants to see a 'Knight Rider' movie in the same style as 'Logan'.

In an short interview during which he discusses meeting 'Machete' director Robert Rodriguez, the star of the '80s series says he pitched the idea.

"I said 'You need to do Knight Rider.' Because he was doing a marathon of Knight Riders and he said 'Can we have a selfie!?' And I said, 'No, I don’t want a selfie! I want to do the movie! I want to shoot the TV series!"

"I want to bring it back and make it dark! Michael Knight comes back and he's pissed," explains Hasselhoff .

"I hope it happens, and if it does, it'll be kind of like Logan. It will be dark. Hasselhoff as Michael Knight in 2017. Knight Rider. The saga continues."

'Logan', of course, features older and darker versions Hugh Jackman's Wolverine and Patrick Stewart's Professor X but it's difficult to envision the same with a artificially intelligent talking car and David Hasselhoff.

The original series was originally broadcast on NBC from 1982 to 1986. NBC attempted to revive the franchise with a 2008 TV series. However, that didn't last due to poor ratings.