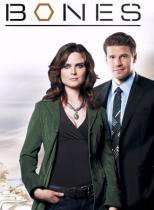 Tonight's episode of 'Bones' is a special one for David Boreanaz as he makes his directing debut.

Boreanaz, who plays Special Agent Seeley Booth, revealed in an appearance on 'Live With Regis & Kelly' on Wednesday that and his wife Jaime Bergman are expecting their second child together.

The March 12 episode titled 'The Bones That Foam' will also see Bones return to the Fox schedule with a run of 11 straight new episodes.

Check out the video below for the cast's reaction to Boreanaz's directing style: