David Arquette and Courteney Cox Sign On For 'Scream 4' 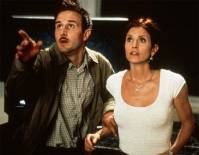 David Arquette and wife Courteney Cox have signed on to once again take on the Ghostface killer.

"We are going to be doing Scream 4," says Arquette. "Kevin Williamson is writing the script at this moment, and hopefully Wes Craven is going to direct."

Arquette will reprise his role as Deputy Dewey Riley and Cox will return as tabloid television reporter Gale Weathers.

"I fell in love with my wife on 'Scream', so the opportunity to bring Dewey's character back to life and for my wife to play that really bitchy character again, it's just going to be really fun."

Although Williamson Neve Campbell has said she has no interest in reprising her role as Sidney Prescott, Arquette says: "I hope Neve does it. I really hope so."

"Kevin has sort of put out the broad strokes (of the story), but I don't think I'm at liberty to share any of that."

David Arquette is currently living in a glass box over Madison Square Garden in New York City to raise money for hunger relief charity Feeding America. He hopes to raise $250,000 for the charity that consists of more than 200 food banks and food rescue organizations.