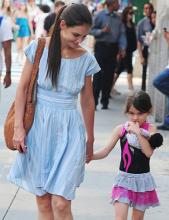 ) got the one thing she wanted most in her divorce settlement with Tom Cruise: custody of daughter Suri.

All indications are that Suri will live with Holmes in New York after she negotiated for primary legal custody. Cruise will have visitation rights.

However, Holmes' lawyers aren't confirming the settlement and instead slamming speculation even after Suri was spotted shopping with her mother in New York.

"There are numerous inaccuracies in the reports regarding the purported contents of the agreement reached between the parties," says her lawyer, Jonathan Wolfe. "The agreement is confidential and its terms will not be disclosed."

Publicists for Cruise and Holmes released a joint statement following the settlement: "We are committed to working together as parents to accomplishing what is in our daughter Suri's best interests."

"We want to keep matters affecting our family private and express our respect for each other's commitment to each of our respective beliefs and support each other's roles as parents."

If you had any doubt whether Cruise's Scientology beliefs played a role in the demise of the marriage, the line about "respective beliefs" ought to confirm it.

The 33-year-old Holmes filed for divorce from Cruise, 50, after five years of marriage on June 28.