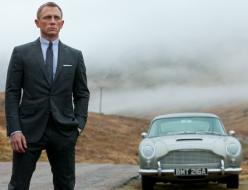 The James Bond star was first shown in a four minute video for the $70,000-plus 2014 Range Rover Sport featuring him driving the vehicle from the docks over the Manhattan Bridge to the event.

After driving the car out to on the red stage, the actor stood for a couple of minutes of photos, and quickly left without saying a word.

Land Rover wouldn't comment on whether the $1 million figure was actor and why Craig left so quickly except to say the arrangement also involved the S.A.F.E. charity he supports.

"We won't comment on our relationship with Mr. Craig beyond confirming that Land Rover supports the charity S.A.F.E., of which the actor is a patron, and will continue its charitable efforts with a vehicle donation later this year," said the spokesperson.

Watch the four minute video, attempted in the style of Bond, along with Daniel Craig's appearance below: