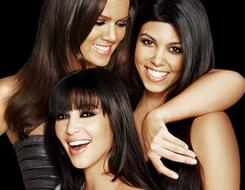 Daniel Craig, who is currently filming his third James Bond film 'Skyfall', is no fan of the Kardashians.

The actor blasts the family for acting like 'f--king idiots' on their reality television show for the sake of ratings.

"It's not about being afraid to be public with your emotions or about who you are and what you stand for. But if you sell it off it's gone," Craig, who is notoriously private about his personal life, tells GQ.

"You can't buy it back – you can't buy your privacy back. Ooh I want to be alone. F--k you. We've been in your living room. We were at your birth. You filmed it for us and showed us the placenta and now you want some privacy?"

"Look at the Kardashians, they're worth millions. I don't think they were that badly off to begin with but now look at them."

"You see that and you think 'what, you mean all I have to do is behave like a f--king idiot on television and then you'll pay me millions."

"I'm not judging it," he says, before he realizes, "well, I am obviously."

"Look, I'm in love," he says. "I'm very happy. And that is as far as I'm prepared to go. Life is long, life goes wrong and I don't want to say something now that might be thrown back later."