Dan Aykroyd Pens Tribute To Carrie Fisher: 'I Hope She Kept My Ring' 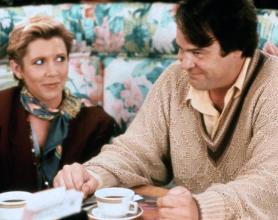 Dan Aykroyd has penned a touching tribute to his ex-fiancee Carrie Fisher.

In an essay in Thursday's issue of 'Empire', the 'Ghostbusters' star recalls their first meeting on the set of 'Saturday Night Live' to the end of their relationship when Fisher left him for Paul Simon.

"I met Carrie at Saturday Night Live," he begins. "She and John Belushi became instant pals. I remember how much she made him laugh. Later, while filming Blues Brothers, Carrie and I fell in love and during the shoot she moved in with me into a penthouse suite in the futuristic, aluminium-clad Astro Tower, which I knew to apologise for. Carrie had the most refined eye for art and design."

Aykroyd said they fell in love on the set of 'Blues Brothers' and were so enamored with each other they "obtained blood tests for compatibility from an East Indian female doctor" and decided to get engaged.

He bought her a sapphire ring and she gifted him "a Donald Roller Wilson oil painting of a monkey in a blue dress next to a tiny floating pencil."

"One of the most brilliant and hilarious minds of our eon, Carrie would say things like: “I love tiny babies. When they cry they turn red and look like screaming tomatoes."

He recalls one trip to Reno where they spent three days in a rented wagon. Aykroyd says he and Fisher enjoyed "three days of full-on weeping to Christmas classics."

He says the weekend was "certainly one of the planet's greatest occasions where LSD was a factor."

Their romance came to an end after they moved into a new "fixer-upper".

"Carrie said, 'It looks like it was abandoned by Fred and Wilma Flintstone'. The next morning she asked me to drive her to the airport and she flew to New York. Architectural reservations notwithstanding, Carrie wasn'’t shallow, we had a great time."

"She was also in love with Paul Simon. She married him but I hope she kept my ring."

Fisher went on to marry Simon three years later. Unfortunately, the marriage ended in divorce less than a year after they tied the knot.