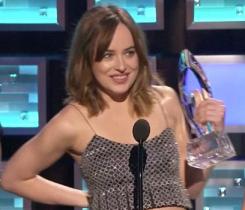 Dakota Johnson laughed off her wardrobe malfunction on stage at the People's Choice Awards.

The moment happened when the 'Fifty Shades of Grey' actress took to the stage to accept Favorite Dramatic Movie Actress when a hug from presenter Leslie Mann apparently damaged the hook holding her dress together.

"Leslie just broke my dress," she said while holding it together with help from Mann.

"Well, it's not like everybody here hasn't already seen my boobs!"

"It's okay, we got it," Leslie told Johnson as the crowd laughed.

"Thanks to my fans I was excited to just be nominated," Johnson then said.