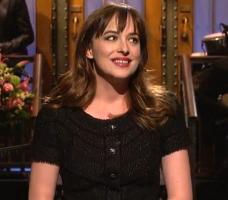 Dakota Johnson joked about 'Fifty Shades of Grey' and her family while hosting 'Saturday Night Live' this past weekend but drew criticism for a sketch around ISIS.

In the spoof of Toyota Camry's 'My Bold Dad' Super Bowl spot, Johnson played an American girl leaving home for, it would appear, college.

Her father drives her to the airport where they exchange their sweet goodbyes.

"Are you sure you don't want to do another year of high school?" asks Taran Killam.

That's when a white pickup truck filled with armed gunmen and flying the flag of ISIS pulls up.

"You be careful out there," her father warns.

The concerned father asks one of the men to take care of his daughter, only to the reply: "Death to America."

"I have a feeling at next year's Oscars, it's going to be … not anywhere."

Her father, Don Johnson also made a cameo and said: "We were just afraid you were going to be naked."