Cumberbatch on Abrams' Admission To Mistake With Khan: 'What a D--khead' 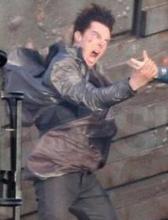 With JJ Abrams' admitting that keeping Khan a secret for 'Star Trek Into Darkness' was probably a mistake, Benedict Cumberbatch is having a laugh at the director's realization.

"The truth is I think it probably would have been smarter just to say upfront 'This is who it is'. It was only trying to preserve the fun of it, and it might have given more time to acclimate and accept that's what the thing was," Abrams tells MTV.

"The truth is because it was so important to the studio that we not angle this thing for existing fans. If we said it was Khan, it would feel like you've really got to know what 'Star Trek' is about to see this movie,. That would have been limiting."

"I can understand their argument to try to keep that quiet, but I do wonder if it would have seemed a little bit less like an attempt at deception if we had just come out with it."

Now in his own interview, Cumberbatch, who played the character, is laughing that Abrams' changed his mind.

"I don't know if it's a bad or a good thing. It was his call. I was fine with it. The intention was to have the reveal for the audience that was going to be thrilling, people were going to go, 'Really!?' And that worked to an extent, because not everyone knew what they were in for when they went into the theater and some people wanted to join in that thrill of seeing it and experiencing it in the theater rather than having it spoiled from reviews or Internet gossip or trailers that gave everything away."

"So, who knows? For those people, I would say it was a good thing. For anyone else who wants to find out, you know, there are always ways of finding out. And people have their hunches. But I sat in a couple of theaters... and both times, it was like, 'Yeah! Whoa!' There was a verbal and physical reaction to it. So I was like, well, there, it kind of works."