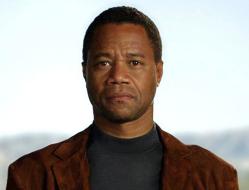 Cuba Gooding Jr is being asked to apologize after lifting up the dress of 'American Horror Story' co-star Sarah Paulson at Los Angeles PaleyFest.

The incident happened as Kathy Bates was walking out after being introduced to the crowd. When Sarah Paulson got up to greet her, Gooding Jr lifted up her purple Prada skirt from behind her.

After letting out a shriek, the actress quickly pulled the garment back down to cover her legs.

The pair, who portray husband and wife on Season 6 of the FX anthology series appeared to be in a playful mood. However, many fans believe it was highly inappropriate.

"Hi, dude. did you apologize to Sarah? you should if you didn't bc what you did was gross and disrespectful," one fan wrote to the actor on social media.

"So is Cuba Gooding Jr allowed to get away with lifting Sarah Paulson's skirt?," asked another. "Total disrespect to a woman."