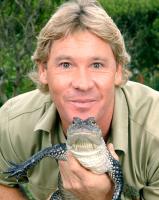 Justin Lyons, the man who was behind the camera when Crocodile Hunter Steve Irwin was attacked by a stingray, has recounted the incident that led to the Australian wildlife expert's death for the first time.

"It was shocking. It was probably always going to be something weird with Steve," Lyons told Australian morning show Studio 10. "I mean, a crocodile or a shark, he was so good with animals, nothing was going to get him."

"We thought he was going to live forever, but it would always be a crazy silly accident, and as it turns out that's exactly what it was."

Lyons says they were trying to get a final shot of the stingray swimming away when the attack occurred.

"All of a sudden it propped on its front and started stabbing wildly with its tail, hundreds of strikes in a few seconds," he said. "It probably thought that Steve's shadow was a tiger shark, which feeds on them very regularly."

"I panned with the camera as the stingray swam away, I didn't even know it had caused any damage. It wasn't until I panned the camera back, that Steve was standing in a huge pool of blood, that I realized something had gone wrong."

Lyons said the barb on the stingray's tail wasn't stuck in Irwin's chest incorrect as many have claimed.

"It didn't come out. Steve didn't pull it out. It's a jagged, sharp barb and it went through his chest like a hot knife through butter. He thought it had punctured his lung," Lyons said. "He had about a two-inch-wide injury over his heart with blood and fluid coming out of it."

"They've got venom on their barb, so, I'm sure, it was excruciatingly painful. He had an extraordinary threshold for pain, so I knew that when he was in pain it must have been painful."

"I was saying to him things like, 'Think of your kids, Steve, hang on, hang on, hang on,'" Lyons recalled. "And he just sort of calmly looked up at me and said, 'I'm dying,' and that was the last thing he said."

Irwin's wife, Terri, has previously said video from the incident will never air and Lyons hopes it stays that way.