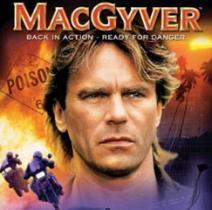 At the Maker Faire in San Francisco on Saturday, MacGyver creator and producer, Lee David Zlotoff, announced that he's working on plans to bring the 80s television series to the big screen.

Zlotoff confirmed that he's planning a "big budget" motion picture with the gadget and science prodigy, and said that he has held the movie rights since the last TV movie was made in 1994.

He has full rights, which also gives him complete creative control to do the movie right which should come as a bit of a relief to fans of the original TV series.

Richard Dean Anderson, who starred in the original series, is now 58 but there will no doubt be calls from fans for him to reprise the role. We would love to see that, however, he may be close to 60 by the time the project is ready to get off the ground. But if Harrison Ford can do another 'Indiana Jones' at 65, anything can happen.

'MacGyver' ran for seven seasons from September 1985, to May 1992 on ABC and has maintained a cult following even after being off the air since then.

The series revolved around Angus MacGyver who used his practical knowledge of science to get out of jams. Doing everything from making explosives using household chemicals, or using a stick of chewing gum to repair a blown fuse.