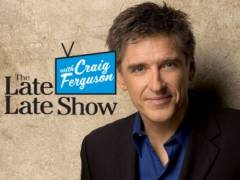 On Friday night, Craig Ferguson replaced the 'Late Late Show' monologue for a heartfelt message about the Colorado theater shootings.

Ferguson explained that he had filmed Friday's show on Thursday and his original monologue cracked jokes about 'The Dark Knight Rises'. But given the tragic events at the film's midnight screening in which a dozen moviegoers were killed, he wasn't willing to air that.

"As chance would have it, the show you're about to see tonight was recorded last night, before the terrible events in Colorado, and the monologue in that show was about Batman, and the movie," Ferguson said. "I felt that it was inappropriate to show that monologue."

"Obviously the events of today would make it difficult to broadcast a show tonight which began with the phrase 'It's a great day for America,'" said Ferguson. "I couldn't let that happen."

"The rest of the show was fine, he explained. "But I didn't want to make a whole show about the events of Colorado, because I'm sure there's been a lot of media coverage, and I didn't want to add my rage and despair to everyone else's."

"I'm not going to try and make sense of it," he said. "I'm not going to blame anyone for what happened there. How do you make sense of something like that? The difficulty I have is to be topical, but for the most part I try to avoid stories which are grisly – because it's not really my job. But I can't ignore this one, and I can't really talk about it in front of an audience with the skeleton robot and all of that – that doesn't make sense. So if you'll indulge me, it's just a bit fun and to be easy before you go to sleep."

"If you are in any way connected to this awful business, I'm sorry," he said. "I'm sorry that happened. It's just awful. And my thought and my sympathies to the families of those who were there, and I just remember we are all diminished when something like this happens."