Craig Ferguson Used To Be In Band With New 'Doctor Who' 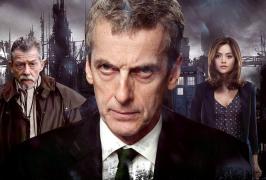 Craig Ferguson tells Seth Meyers on 'Late Night' that he and new 'Doctor Who', Peter Capaldi, used to be in the raucous Dreamboys.

"When the rest of the guys were at Emerson or Harvard, doing stuff like that, I was taking acid in the back of a van with the guy who ended up playing The Doctor," says Ferguson.

"I don't know it happened but Peter who plays The Doctor -- not Doctor Who -- he and I were in a band called Dreamboys together. The Dreamboys, we didn't strip... although we should've."

"Bush and Cheney were there and he said 'Craig was in a band called the Bastards from Hell, which is coincidentally the same name as Dick Cheney's band' -- which I thought was the best joke of the night."