Courteney Cox: I Haven't Had Sex Since Split, Spills On Arquette 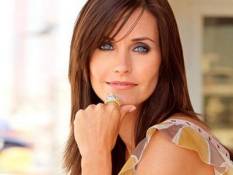 Courteney Cox made a surprise appearance on Howard Stern's radio show to share some of the reasons she broke up with David Arquette -- and a lot more.

Stern began by asking why Cox rejected Arquette's advances during a recent trip to Disney World with their 6-year-old daughter.

"We were talking, we were laughing, it was really not the place for it, it was early in the morning," she explained "This is one of our problems in our relationship."

Cox continued that Arquette wanted it too much and sometimes even at the most inappropriate times.

"Whenever I would need consoling from David he could not literally put his arm round me for one second without completely getting a boner. It was like, 'Oh I'm so sorry you dad's dying. Can we f--k?' That's the truth."

"I know I'm more in touch with what she needs now," responded Arquette, who is guest hosting with Stern this week. "She takes one sort of thing or a couple times and she clumps it and that's what happens all the time in our relationship. It's not really true."

"The truth of the matter is that we love each other so much. We have such affection for each other, but we are very different. I'm a homebody. I like to have people over, but I'm a little socially not – I don't love it."

"David – he doesn't drink anymore, he's completely sober – but he likes to go out and dance. He really is a very gregarious guy. He's very outgoing. I'm much more of an introvert."

"I think that in our marriage he rebelled against me a lot," she said of Arquette. "I'm the mother that he rebelled against. He also is completely different than me. I'm practical, he's a dreamer. As his wife it's harder for me - can't we just keep it simple? I feel I'm less judgmental."

Cox did acknowledge Arquette was gifted with the second largest private part she's ever seen. Although she didn't share who held the number one slot.

Asked if she's had sex with anyone else since her split from Arquette, despite the rumors of being involved with her 'Cougar Town' co-stars, she blunt said, "I have not had sex."

"They really don't want to get involved in this mess," she said of her co-stars. "These guys actually really like David, and I'm also Executive Producer of the show, it's kind of an awkward thing. I think they like David too much and it's too weird of a situation."

"Thanks, this was like free therapy," Cox told Stern.