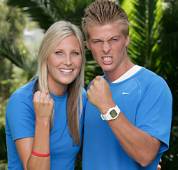 Frontrunners Meghan Rickey and Cheyne Whitney suffered a minor setback on the race's final leg in Las Vegas but the cool thinking team came through at the craps table to take home the million dollar prize.

The final leg began with all three couples on the same flight to Las Vegas. The challenges involved collecting a clue from an Elvis Presley impersonator, repelling down the side of the Mandalay resort, retrieving a bouquet by jumping in wires onstage, and counting $1 million worth of chips after figuring out the name of a casino.

Meghan and Cheyne, who have been the favorites almost throughout the race, looked like they were on their way to an easy win after they were the first team to grab the bouquet. But the two took a stumble after they headed to the wrong casino from a clue for the final challenge.

With the clue to go to the resort named for the most famous casino in Monaco, their cab driver took them to the Venetian resort instead the Monte Carlo.

However, with all the teams still counting their chips, when they finally arrived, the pair calmly put together a system to count $1 million from a large pile of chips and were the first team to leave the tables. They were sent to see Wayne Newton, who told them the finish line was his ranch.

And with the rest of the teams cheering them on, Meghan and Cheyne were named the official winners of the 'Amazing Race'.

The other two teams were gracious at the finish line in defeat but the best, and most consistent, team definitely took home the prize.

The bickering brothers realized their faults and tried to work together in Las Vegas but the erratic and screaming Ericka was back in full swing for the finale.

Seemingly not having learnt much from her time on the race, she screamed to be taken down from the wires to grab the bouquet -- only to later want to be put back up.

In the end, the move by the easily frustrated Ericka cost them valuable time that they didn't have. A lot of us would have loved to have seen Brian win, but unfortunately, there weren't many on the side of Ericka.

Check out 'The Amazing Race' winners at the finish line, with additional footage that wasn't shown in the episode, below: