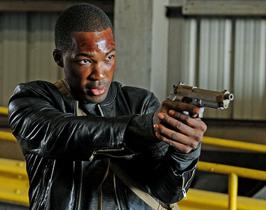 Fox aired the first extended trailer for its '24' reboot during Game 1 of the World Series on Tuesday night.

Hawkins plays Sergeant Eric Carter, who killed a terrorist leader six months ago in Yemen. Out for revenge, the terrorist's followers declare a fatwah against Carter, his squad and their families, forcing them into federal witness protection. But after an attack on Carter's own life, he knows his team is now exposed.

That's when he enlists Rebecca Ingram (Miranda Otto), who quarterbacked the raid that killed Bin-Khalid and the clock begins.

'24: Legacy' is slated to premiere following the Super Bowl on Sunday, February 5 with a new episode the following night.