Conrad Murray: I Tried To Get 'Drug Addict' Michael Jackson Off Propofol 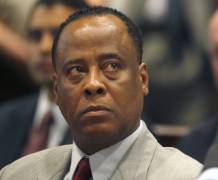 Conrad Murray, who spent two years in prison after being convicted of involuntary manslaughter in the death of Michael Jackson, says he tried to wean the pop star off the dangerous sedative that killed him.

Calling Jackson a "drug addict," Murray blamed the singer for causing his own demise.

"I did not agree with Michael on using such a powerful sedative for sleep," Murray told Australia's '60 Minutes' in an interview.

"So what I told Michael was that, 'We have to get you off this substance.'... but Michael Jackson is not a guy you can just say: 'Stop it.'"

Murray maintained that it was Jackson who administered the dose that ended up killing him.

"I was not present when Michael Jackson took matters in his own hands," Murray said. "Michael Jackson, as you have realized now, is a drug addict."

The program's host also asked Murray another question: "Do you think Jackson was a pedophile?"

"I'm not prepared to answer that question, not now," Murray said after a long pause. "And I tell you the reason why -- because my interview with you is candid and honest, and I will not make up or fabricate anything. I'll never be unfair to Michael and I'm not here to destroy Michael."

"You asked a question and I'm not prepared to answer -- not now."