Conan O'Brien To Eventually Shift To Weekly Instead Of Nightly 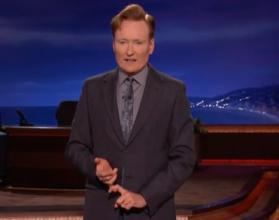 Conan O'Brien's talk show will be eventually shifting from a nightly to a weekly format.

Turner CEO John Martin tells TheWrap at the Consumer Electronics Show in Las Vegas that the move would make sense because it would play to Conan's strengths by letting him do more remote broadcasts and shows on the road.

The comedian has recently taken his show to Cuba, Berlin and South Korea which has proved to be a success both in ratings and creatively.

The move would also help Conan make episode stronger and, as a consequence, perform better in the ratings.

'The Daily Show' currently averages double the audience that 'Conan' does nightly. TBS has signed the host until 2018.

The network is considering an hour-long weekly format.